I will admit that I was a bit intimidated by the large letter stickers from the October Artisan kit. I could have skipped using them. However, I am not one to shy away from a challenge. Instead, I chose to peruse Pinterest for a few ideas.

It's easy to get lost on Pinterest. I like to approach the pins with a purpose and to set a time limit for me to search within. My goal was to search my boards for layouts or magazine ads that featured large bold letters. Almost immediately, I found a magazine cover that would work. Don't waste too much time second guessing yourself. Choose the inspiration that stands out to you in that moment.

This particular cover reads almost like a scrapbook sketch. It is clear where the title and photos should be placed. Journaling can easily fit in the space allotted to list magazine articles. Looking at this cover, I knew I wanted a four letter title and at least three photos. 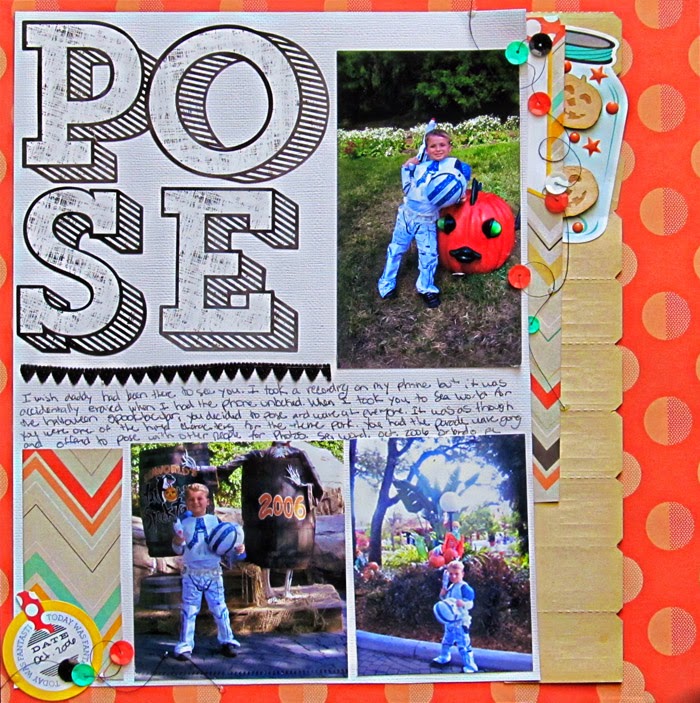 One Halloween, my son went around Sea World posing as though he were one of the theme park characters. He had the parade day hand wave down pat and even offered to pose with strangers for photos and autographs. I had a big kick watching him ham things up that day. It was easy for me to conceive the four letter title to match these photos.

I began the layout by placing the title on cardstock. I then added the photos, leaving space in the center for journaling. My photos weren't quite large enough to fit the space in the same manner as the photos in the magazine cover. I chose to add a piece of patterned paper as filler. I could then cut down the cardstock and mount it to a piece of patterned paper.While I like the bold graphic look of the magazine cover, it's just not quite my style. I chose to layer in vintage tickets, patterned paper and stickers.

Pinterest can yield many inspiring results. Approach Pinterest with a specific goal in mind,then set a timer and look around. It never takes long to find the perfect inspiration.

Posted by CStrickler at 9:00 AM