Halloween is one of my Favorite holidays. The October JBS Mercantile kits managed to capture everything that embodies the holiday and the season. I have been so inspired to pull out older Halloween photos in order to get them scrapped. Most of the photos include the typical Halloween costumes and Trick or Treat candies. However, I had one set of photos that certainly didn't fit in that typical category.

Most years, my son wore his costume as soon as we acquired it. By the time Halloween would come around, it would be well worn and loved. This time, he decided the costume he had chosen was't particularly comfortable. He wouldn't pose for a decent photo. In fact, the wig was off before he even started down the driveway. He was supposed to be Yu-Gi-Yoh but without the wig, many grown ups assumed he was Sgt. Pepper from the Beetles' song.  This caused my son to proclaim at each and every house that he was not Sgt. Pepper. Just like that, a scrapbook page title had been born. 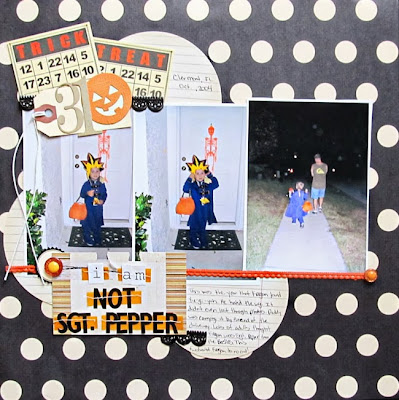 I wanted supplies that embodied both his statement and the fun atmosphere of Trick or Treating. I chose most of my supplies from the October Mini Album kit. I loved the bold traditional colors mixed with the playful patterns. The mini album pages were easy to layer into the layout and provided ample space for journaling. 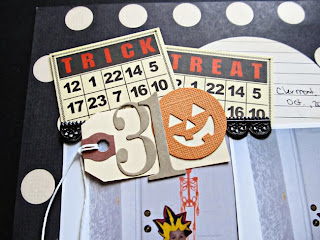 I added in a few of the Halloween Bingo Cards  along with some sparkly buttons and enamel dots from the Artisian kit. Using the pre-cut elements of the mini album kit was a real time saver for me.

The things kids say can help change an ordinary event into something unique. Have your kids said something especially memorable about Halloween or Fall?

Posted by CStrickler at 9:00 AM